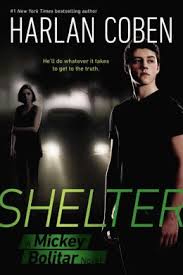 Recently I mentioned that crime writing was trending in the YA genre. So I have been sleuthing, researching and investigating a few of these novels. The first one I picked up was Peter Cocks Long Reach, I found it totally unsuitable for the 14-18 age group. It was graphic and read more like an adult crime novel.

The next novel I chose was by the well- respected crime writer Harlan Coben he has turned his hand to YA with a new crime series. The first is called Shelter.

The first thing I must mention is cliché, cliché, and cliché.

Next thing I will say is it works.

Despite the cliché use of the new kid in school, dorky best friends, and parent departed. The novel is page-turning fun. I recently wrote a post about dyslexia and a reluctant reader and how this affected my family. This is the type of book that really appeals to the reluctant, male, teen reader. (no sexism intended)

Mickey’s father has recently passed away, his mother is in rehab, and now his new girlfriend has disappeared. The only responsible adult in his life is his uncle Myron, and he wants nothing to do with him. Mickey is determined to find out what happened to his girlfriend and this leads him into a seedy world of crime. Along his journey he forms friendships, which you can see are going to carry throughout the series. These friendships make the story interesting. The characters are fun, likeable and a little clichéd.

Harlan has successfully adapted the language to a teen reader; there is no condescension in this statement. There is a need for an easy, fast paced read with relatable characters. This is an excellent novel for either those who want a light holiday read or the teen that finds reading a chore.

Warning: The main character goes to a strip club; there is suggestion of torture and sex slavery.

4 thoughts on ““Shelter” A Book for the Reluctant Teen Reader.”