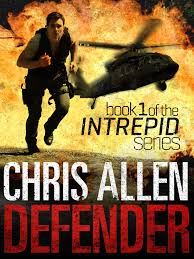 If you are a die-hard Ian Fleming fan, then Chris Allen’s Intrepid series may be what you’re looking for –think of it as James Bond has had a revamp. Gone is the misogynist protagonist, and in Bonds place is a new hero – Alex Morgan. Morgan works for a secret agent branch of Interpol, he is tough but fallible, and is a character that I think readers will become invested in as they read the future books.

What gives the Intrepid series kudos is the detail. This has obviously been helped by Allen’s extensive experience in the military, federal police and aid work. It’s this experience that gives the book an authenticity that’s hard to attain by research alone. The story feels grounded in reality –something you don’t usually find in the Action Adventure/Spy Thriller genre.

This solid foundation doesn’t detract from the action –far from it. We are taken on a ride, with Alex Morgan, through the seedy world of gun trafficking in Africa, to corruption in the higher echelons of government agencies in England and then onto a climatic finish in the streets (and harbour) of Sydney, Australia. Allen has given us a protagonist who “keeps the bastards honest”, a character you can barrack for, but he has also delivered on international intrigue, a spy who is ruggedly good- looking (always a bonus), a girl (yes, there is a little romance), action, military know-how and a genuine good read for fans of the genre.

Defender is the first book in the Intrepid series which has recently been optioned for a film and television series. It is available on Amazon http://www.amazon.com/Defender-Morgan-Interpol-Thriller-Intrepid-ebook/dp/B00ABQ0L2A/ref=sr_1_1?ie=UTF8&qid=1412811147&sr=8-1&keywords=defender+chris+allen

I caught up with Chris Allen and had the opportunity to discuss the future of the Intrepid series. This interview will be posted in the coming days so stayed tuned.