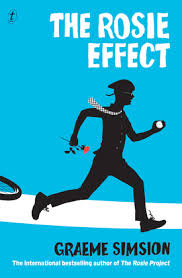 Being a big fan of the first book, “The Rosie Project’ I was really looking forward to reading the next installment in the life of the much loved protagonist, Don Tillman, albeit a little anxious. Unlike a series this is more like a sequel and I was concerned it would fall into the jaws of the sequel curse.

There was no need to worry, as I found The Rosie Effect to be just as delightful as The Rosie Project. Granted the book didn’t have the freshness or “surprise factor” as I had visited Don’s life before, but once again I became invested in Don’s life, and I laughed out loud and stayed up to the wee hours anticipating the ending.

This is not just a “How to “ book for those square pegs trying to fit into round holes, but it’s a unique novel that explores deeper issues such as judgment and individualism. What Simsion has done well is create characters around Don who have real-life problems and flaws. This emphasizes that we are all imperfect, and yet we are all the same, and what we all need is acceptance and friendship.

If you’re looking for something different from the first book, you won’t find it, but let me remind you of how you felt when you read the last word of The Rosie Project and you were disappointed that it had ended. If you are new to Graeme Simsion’s award winning book then grab both books at once and think of it as one book, and extend the joy. I can think of no better way to spend my day than with a smile on my face laughing at the predicaments and antics of Don Tillman.