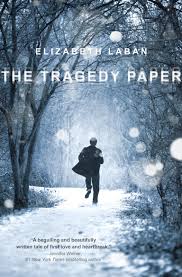 The Tragedy Paper by Elizabeth LaBan
Let me first start by saying; I love the cover of this book. It’s the perfect summation of the novel.
Blurb
“Every year at an exclusive private boarding school in New York State, the graduating students uphold a historic tradition – they must swear an oath of secrecy and leave behind a “treasure” for each incoming senior. When Duncan Meade inherits the room and the secrets of Tim Macbeth, he uncovers evidence of a clandestine romance, and unravels the truth behind one of the biggest mysteries in the school’s history”

This is a simplistic summary, and it is a simple story, but it has rich characters and a captivating setting (who doesn’t love a boarding school setting). The main character, Tim, is an Albino, LaBan uses this to emphasize the teenage struggles of ‘do I, don’t I, fit in’. I don’t feel Laban was exploitative or insensitive, I feel she used this condition as an effective tool to express the feelings of many young people.
The “treasure” Tim leaves Duncan, is a set of audio CD’s telling his story of the previous year. Duncan discovers their lives are taking similar and often parallel paths. As Duncan plays the CD’s the story unfolds and we hear how Tim deals with his social inadequacies  at a new school, and as a teenager in love. Tim’s insecurity and self doubt ultimately leads to “the tragedy’. Duncan learns from Tim’s mistakes and discovers insight to himself and his own doubts are reassured through the therapeutic effect of Tim’s CD’s.

What I enjoyed most about the book, is the suspense that LaBan creates. The rhythm of the novel is like a ticking clock. The characters and the reader are hyper aware of time passing. This creates tension and a sense of urgency. We are left waiting for Tim’s words to reveal the secret, and wondering what the tragedy will be. As Duncan is continually drawn back to Tim’s CD’s, so are we. We are given clues throughout the book and can piece together a vague idea of the coming tragedy, but this, in no way, detracts from the book.

I really enjoyed this book, and LaBan’s writing. I found I was grabbing the book at every moment.